It started snowing over the weekend, and by the time I woke up this morning the branches outside my window were piled with deep, precarious white heaps. London isn't used to snow. Never mind that the UK is well known for Weather, we don't have the infrastructure to deal with it. Halfway through my first cup of tea this morning, I was informed by the Internet that almost the entire public transport network had been closed down, and nearly everyone I knew was staying home from work to drink hot chocolate and play in the snow.

Unfortunately for me, I had a shoot booked with a new photographer at the camera club where I occasionally do model residences. I checked the travel news forlornly: all the tube lines were shut except the one I needed to get to the studio. And the photographer was texting me and raring to go. No snow day for me.

By 11am, I'd showered and shaved and packed, and was just putting the finishing touches to my makeup when my phone beeped. The photographer couldn't get through to the camera club; they were almost certainly shut down for the day. Did I want to head to a park closer to home and take snow pictures?

Anyone who's worked with me on location knows how much I like frolicking outdoors. I texted back an enthusiastic yes, and started re-packing, flinging delicate lingerie out of my bag and throwing in warm jumpers and long, gauzy white skirts. I wore hold-up stockings under my jeans to save time getting changed later, pulled on thick socks and stompy boots, filled a thermos with tea, and headed out.

The park was much busier than either of us had expected, and the snow was still coming down thick and fast. As we trudged uphill on packed, slippery snow, snowflakes clustered on my hair, scarf, nose and eyelashes. By the time we found a secluded spot beneath the trees, my nose was running and the tips of my fingers were numb.

We stayed out for a couple of hours, taking vanilla shots under the trees. As soon as I took my coat off fresh falling snow formed an instant layer on my bare skin. The cold made me irritable, and I kept enforcing breaks on the poor patient photographer, while I stamped my feet and huddled in my damp scarf and gloves, sipping hot tea from my thermos. I had a collection of elegant dresses which I wanted to get some shots of in the snow, but he was more interested in my short skirts, and in any case it was almost impossible to find somewhere to change out of sight of all the kids running riot on their unexpected day off school. Normally I'd want to join them, but I was so cold I just wanted to be indoors with a dry blanket and hot drink. Preferably one containing brandy.

We managed to get through a few outfit changes, in fits and starts, and found somewhere secluded enough to do some figure shots. We'd been out in the snow for nearly two hours, tramping around the park trying to find good locations, and I was frozen to the bone. Common sense warred with my desire to get at least one nude shot before we called it a day. I found a corner out of the wind to undress, and dashed out into the icy blizzard. We took photos at maximum efficiency for a couple of minutes before I had to hurry out of the wind and get dressed.

All this time the photographer wasn't wearing gloves, and claimed not to be feeling the cold. (I was tempted to suggest that maybe we should swap places, but I don't think that would have gone down too well.) Lesson learned: I may be able to take a reasonably hard caning, but when it comes to cold I am a complete wuss.

I have a new-found respect for models who shoot in the snow. I had my work cut out trying to stop myself from squinting against the snow glare, and no face powder in the world could stop my nose from gradually going red. Any model who attempts bondage or spanking in the snow is far, far braver - and more photogenic - than I. 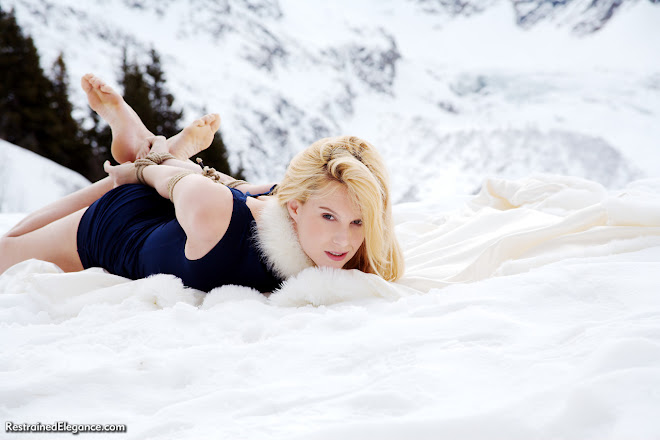 (Thanks go to Spanking Pixie and Amelia Jane Rutherford for the photos.)