My friend who has spent several years working with urban sex workers pointed me at a couple of heated discussions about sex work lately. Of course, conversations about sex work are often heated, mostly because not enough of the people participating in public debate seem to understand that it's just as unhelpful to generalise about all sex workers as it is to generalise about all women, or all people of colour, or any group defined by the mainstream as Not One Of Us.

However, once you get past Julie Bindel's predictably ignorant hostility, this debate on legislating prostitution contains some surprisingly balanced views. (Oooh, words cannot express how much it infuriates me that Ms Bindel is so often wheeled out to represent "the feminist perspective". Not all feminists think all sex workers are necessarily victims! I'm a feminist, I work in the sex industry, I'm not a victim, and Julie Bindel doesn't represent ME.)

There are some excellent, moderate, well-reasoned arguments in that thread, from a variety of perspectives, including some realistic analysis from a politician and a police inspector, all of whom advocate a balanced approach aimed at helping women who want to leave prostitution, and not persecuting those who don't. I'm not surprised to hear this from a sex worker, but it's affirming to hear it from the HM Inspector of Constabulary for Scotland:

Having led the Operation Pentameter investigation into sex trafficking in Scotland, I know that there is a serious problem around enforced prostitution. But you cant assume that everyone in the industry is there because of coercion, and moralising the argument by saying that no-one working in the industry could be doing so of their own free will detracts from efforts to protect the vulnerable.

Sadly, all this common sense doesn't seem to have got through to Julie Bindel, who continued to make outrageously blanket statements about the victimhood of all sex workers in today's Guardian, in response to Pamela Stephenson Connolly's Agony Aunt letter to a reader "hooked on prostitutes". I found Connolly's initial advice far more sensible than her justification after the fact, which contained several flawed assumptions, but Julie Bindel's closing remarks are so ignorant the stupidity sort of cancels out:

"Next time you're with a sex worker, ask her for some pointers," concludes Stephenson Connolly. Does she really think women having to service punters for a living concern themselves with teaching men how to give pleasure to women? They want to get it over with as quickly as possible and learn how to fake enjoyment rather than actually achieving it. Prostitution is a nasty business.

Why of course Julie, I forgot that you are both omnipotent and telepathic, and capable of speaking on behalf of all women without actually consulting them. Need I mention that, on the contrary, the sex and spanking professionals I know who offer private services consider listening, counselling and offering comfort and support just as much their job as the physical aspects? Most of the sex workers I know would be not only willing, but more than able to offer a client good advice about sex or relationships - especially if that client was a regular.

Yes, I know this isn't true of everyone who sells sex. Guess what? Sex workers aren't a monolithic group of identically hapless victims, and calling them so is just as dangerous and offensive as calling all women sluts or bitches. Sadly, this basic fact seems to have escaped Ms Bindel. 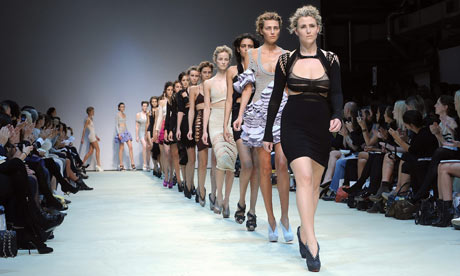 The fashion industry finally seems to be catching up with the European spanking scene in its acceptance of a variety of body shapes: size 12 and 14 women recently appeared alongside their thinner counterparts on catwalks during London Fashion Week. Of course, such an outrageous decision was never going to happen without drama, but let's face it: the industry is probably better off without the stylist who flounced out in protest. The show only included three "normal-sized" and even they only went up to size 14 (I think 16 is the average dress size in the UK?) but it's another baby step, to match the success of Beth Ditto's fashion brand, and plus-size model Crystal Renn's "new vogue for women 'lush and sparkly with nary a jutting collarbone in sight'."

Designer Mask Fast showcased sexy minidresses on the models, proving his designs don't just look good on size 0 figures. Fashion, advertising and entertainment still have a long way to go in embracing body-positivity, but it's good to see it gaining momentum.

On the topic of fantasy bodies vs. real ones, Natty has written another excellent post about being kinky with a chronic illness, called When Play Is Work. I've already written a lengthy comment in reply, so I won't say much more here. This topic is extra-relevant to me today: my hopes of getting a chance to play with Tom this weekend have just been scuppered by his work again. I'm more worried about him than disappointed: I know if I'm patient we'll find time eventually, and I'm lucky to live so close that we can spend time snuggling and looking after each other instead. But at times like this the contrast between the films I make and real life couldn't be more obvious.

Natty's post is valuable because it highlights the way that even when reality doesn't mirror fantasy, it can still be beautiful, rewarding and memorable. For Tom, like Natty, play is often hard work - and that's one of the reasons it's so intense and rewarding when we do manage it. And when it's just as often me who's too tired to play, it's good to be reminded that play doesn't have to be easy, or perfect, or live up to fantasised expectations. Flexibility, empathy and understanding will go a long way.

But sometimes, working hard just isn't the answer. Pushing myself too hard is often the reason I'm too exhausted to enjoy play, and exerting myself further may not help in that situation. And I certainly wouldn't ever expect Tom to work harder than he does to try and provide what I need - I'm more likely to want to reassure him that it's okay if he can't. It's down to the individual to assess how far they can push their body, and when it's time to chill out and give yourself a break. I can't make that decision for Tom any more than I'd want to make it for Natty.

I am blessed in my relationships in so many ways, and I try to be aware of how lucky I am. But even spanking models have to deal with reality undermining fantasy at times, and none of us are on top form all the time.

In producing my own spanking porn, I already intend to emphasise the agency, desire and personality of my submissive models (male and female), respect their boundaries, and celebrate a variety of body types. But I'm still trying to work out how to make spanking films that deal positively with disability and illness. Domestic discipline scenes dealing with real people's limits with humour and sensitivity are a possibility. And if I work with disabled models I can ask them if they'd like to appear on film with any visible supports they may have, such as crutches or a wheelchair - but not all disabilities are visible.

Fantasy is usually idealised, but I want to try and be as inclusive as possible: I want to make porn people can recognise themselves in. I know too many kinky people with chronic health problems to be comfortable erasing their experience for the sake of a whitewashed, glamorous, unrealistic fantasy world. There must be ways of telling hot stories about real people, making the reality of having a non-perfect body crucial to a kinky narrative in the way that Jacqueline Applebee does in stories such as What I Do For My Pain. I'm still trying to work out the best way to approach this (and I imagine it'll be an ongoing process), so I'd love to hear any input, stories or ideas you may have.