a complete cure for OBESITY, HYSTERIA and GOUT

Tom and I have started watching Mad Men; we've only watched the first few episodes, but I'm enjoying it so far. The portrayal of 50s culture is deeply claustrophobic, and really puts paid to the claims that life is worse now than it was then - certainly in terms of social permissiveness, equality and personal freedom.

I was chatting to a friend about it last night, and said I wasn't sure how I felt yet about the character of Peggy (who I still can't stop thinking of as Zoey Bartlet). I'm not finding her crush on Pete at all convincing, as it seemed to me that her reasons for sleeping with him in the first episode were more calculating than that. My friend suggested that rather than being calculating, she probably just slept with him because she was horny, and that she liked the way the show uses Peggy to discuss female sexuality in that era. She told me about the storyline later in the series (spoiler alert!) where Peggy discovers that an electronic "weight loss" machine has secondary benefits in the form of certain vibrations. Hilariously, she then has find a way of raising the topic with her boss, a marketing exec, so he can subtly hint at the machine's other use in the advertising. I can't wait to see this :)

It reminded me of an image NSI's photographer Billy linked the other day:

Of course, no-one could come out and say "stimulates the PELVIC AREA, leaves you feeling REFRESHED and GLOWING" but they got as close as they damn well could in the circumstances. I mean, come on. How many ladies do you think would have ridden this machine side-saddle? 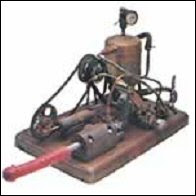 Unfortunately, I don't think it's historically accurate. But it generates all kinds of interesting images. Imagine the sounds it would make - the hissing of steam, clunking of gears, the grinding of cogs and pumping of pistons ... Fucking machines don't interest me much in general, but a steam-powered one? Oh hell yeah.