Anna Span's pornography may not always be serious, but it is absolutely political

Perhaps surprisingly, most of the coverage has been positive. Heresy Corner has a rundown of the response from most of the major papers - it seems everyone's covered this one, from the Guardian to the Daily Mail. To me, this makes far more exciting news than the mere fact of her candidacy. Quite apart from the wider social implications, if Anna Arrowsmith can run for parliament, it bodes well for the potential impact of my current career on any more public endeavours I might undertake in the future. Kink is still considerably less permissible in our society than mainstream sex, but the details of Arrowsmith's career have promising implications for my own situation. 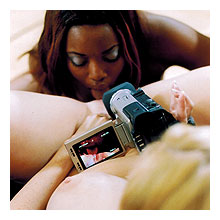 In an industry as historically misogynist as pornography, Arrowsmith's gender is radical in itself, but the ethos of her productions also stands out from the crowd. The Heresiarch may sneer at the implication that her work is "serious and political", and I'll concede the former - from the stills and descriptions on her website, her productions seem joyous and informal, full of real smiles and infectious laughter. But viewed in the context of the industry, her films are absolutely political.

Easy on the Eye is feminist, cutting-edge and very political, not only because it is (was) woman-led, but because: