'Discomfort me with apples': a fantasy shared

I love the two most recent posts by Abby Williams, telling the story of an impromptu roleplay scene in which she's punished for scrumping apples.

Escalation is a fairly common consequence of sharing a fantasy with a top. It's your fantasy, in which everything is arranged to your liking. Emma Jane has recently written articulately about the difficulties involved in this, how much detail to go into, how faithful a reproduction it's reasonable to expect. As a bottom, it's not usually realistic (or fair!) to expect a top to become a cipher, to play their role exactly as you imagine it; and it's unfeasible and unsatisfying for the bottom to micro-manage a scene in advance. So offering a fantasy to a top is very much a gift - you're not asking them to reproduce your vision exactly, but opening it up to their personality and contribution. After all, most self-respecting tops prefer to inject a little surprise into a scenario, rather than merely reciting lines agreed in advance.

In my experience, when I've asked one of my doms to do something I've fantasised about, one of two things happen. It's either a very fluffy, very consensual, very instantly gratifying scene where I get what I want and there isn't much of a D/s dynamic in action. Or they take the opportunity to turn the tables on me - change something, do something I didn't expect, go harder than I expected - anything to unsettle me a bit, to swing the balance of power their way. Ironically, if my fantasy is of an edgy, intense scene, this is pretty much the only way to give me what I've asked for. Reproducing my fantasy exactly as described may tick all the boxes, but it won't have the same psychological impact as a scene in which I'm given something real to overcome, some genuine fear or uncertainty.

I know this, and yet I'm still not used to the way it makes me feel. When an asked-for scene makes me struggle, I'm swamped with feelings of inadequacy. I asked for this, I fantasised about it, why can't I take it? Even after the scene is over, I can dwell on that initial resistance, wondering if it means I'm a wimp, or not submissive enough. And yet, over time, I have come to realise that without initial difficulty, the scene would lack impact - would lack that psychological journey which gives it meaning. 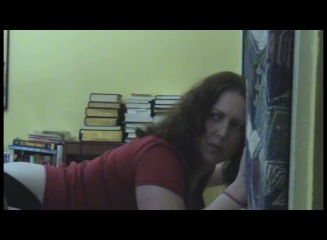 Abby's writing describes this experience perfectly. When her husband initially springs on her the apple-scrumping punishment fantasy she's told him about, she doesn't react as positively as she expected.

I bent over, fingertips to toes, shifting my body weight from side to side as if I really was an impatient young thief, ready to receive her spanking so she could be on her delinquent way. "Thirteen strokes, then," said Mr. Williams. "You will count."

I find roleplay can liberate me to feel anger and irritation with a top in a way I wouldn't be comfortable with in most of my romantic D/s dynamics. But it's not just an in-character fabrication - it's a genuine reaction to the pain.

The fifth and sixth strokes were less shocking. I counted them properly and I didn't make a scene. Stroke seven would mark the halfway point. I had started to relax after the two strokes I could handle; I thought I had shown that I was willing to take the punishment and that he would be less forceful about the punishment, in kind. I was wrong. The seventh stroke crossed my thighs in a painful amalgamation of cruelty and curiosity. Mr. Williams knows that I detest any spanking upon my thighs, and I know he's always interested in my reaction. Unfortunately, I didn't realize that I was being tested. Instead, I screamed. I don't know if I was speaking to Mr. Williams or myself when I followed the scream with, "What the fuck?" I just had not been expecting that level of pain in our apple farmer scenario.

The silence then was so strong that I began to twitch. "I'm sorry, Sir," I whispered. "That's seven."

Strokes eight through twelve were hard, but my submission was no longer an act. I wasn't going to fight the belting any longer.

This passage really resonates with my experience. The hottest scenes are often the one in which the bottom can't "win" - in which we can't predict or manipulate how things will go. But it's not an easy ride, and I wouldn't want to do it with someone I didn't trust utterly.

I love how effortlessly Abby blends fantasy and reality; how her innocent apple farmer scene turns unexpectedly nasty - and then unexpectedly sexual. My favourite bit is in the second part of her write up, the perfectly captured moment where all the tension is broken:

As wife, I know I'm wet, know I'm ready for Mr. W to take the scene where it always leads, but the swish of a cane through the air behind my poised backside lets me know the farmer is not ready to let the apple thief off so easily. I clutch a pillow just before the cane lands.

Thirteen strokes of the belt have not properly warmed my bottom and I lurch forwards into the pillow to stifle my howl of pain. A tap on my lower back reminds me to return to position, kneeling on my hands and knees properly with my back arched and bottom presented. I tensely shift back, not ready but not wanting to seem unwilling.

The next stroke cuts full across the spot where bottom meets thigh, and though I begin to wimper, the thief, who can say the things I would not, says through clenched teeth, "That. Fucking. Hurt."

"Maybe this will help with the pain," Mr. W says. He goes to the nightstand and I think he's going to pull out one of the smaller paddles, something to finish warming me before the remaining eleven cane strokes I know he still wants to give me. Trusting in my husband, I close my eyes.

He returns to his place behind me, stroking my bottom, then clutching the flesh beneath his palm, pulling me open so that I feel even more naked than I already am. His finger touches the orifice between my reddened cheeks, pressing just a little. I relax into the touch. He presses deeper, then pulls out. I think I am about to receive a gentle leather paddling, something sexy, something that will finally send the farmer and the thief from the room. Instead, he presses into me again, this time with something thicker, firmer. It's not flesh. I recognize the toy we bought just weeks ago specifically for this purpose, for this spot, and irrationally, indignantly, the apple thief rears back. "Sir! I hardly think I know you well enough for that!"

Mr. W, clever farmer that he is, pushes me back down. "You've been on this farm before," he says.

I can't hold back. I snort, then giggle, then I'm all out laughing. He begins to laugh too, and the tenseness of the entire scenario is broken. I wiggle my bum at him. "You're right," I say, "I have been on this farm before. I remember now why I came back."

Posted by FqbbUnlop at 09:02 on 18 Feb 2021
phone payday advance online cash advance texas how to get money loan without a job

Posted by Mqymyt at 00:56 on 7 May 2021
ivermectin buy nz - stromectol in canada oral ivermectin cost

Posted by Obiisz at 20:56 on 13 Jun 2021
vardenafil tablets - where to buy vardenafil in singapore online apotheke vardenafil

Posted by Myfpxi at 11:24 on 1 Jul 2021
ivermectin without a doctor prescription - stromectol tablets ivermectin over counter

Posted by Ljpbzz at 12:58 on 4 Jul 2021
can you buy lasix over the counter - doxycycline 100mg generic average cost for doxycycline

Posted by Lpzxuy at 13:15 on 21 Aug 2021
can i buy ventolin over the counter in usa - ventolin purchase ventolin price canada

Posted by Uvftwb at 21:34 on 12 Sep 2021
can you purchase prednisone for dogs without a prescription - where can i buy prednisone online prednisone 20 tablet

Posted by Anmucp at 00:49 on 24 Sep 2021
generic accutane for sale - accutane cream uk where can you get accutane online

Posted by Anxeqh at 17:03 on 29 Sep 2021
where to buy vardenafil in canada - order levitra ed medication

Posted by Ijazaj at 23:07 on 3 Oct 2021
orlistat from mexico - alli or xenical orlistat alli xenical

Posted by Riwask at 21:40 on 8 Oct 2021
deltasone without script online in mexico - where to buy prednisone 20mg no prescription canadian pharmacy prednisone