I put a bit of makeup on and sat around the cinema lounge with a cola. I was hoping I'd bump into someone I knew, but there weren't any familiar faces - and I didn't even know if anyone spoke English. I wanted to go to bed, but my host wasn't going to be home until after midnight. Added to all this I was on the first day of my period, so my body's natural response to all this was amplified and I was a bit emo mess. I was starting to feel anxious about not knowing what was happening the following day. I don't like not having a plan. Trying to stay calm, I hunkered down and retreated inwards. It turns out I'm only an extrovert when I'm in control.

Someone asked me if I had a ticket to the opening screening that night. I didn't realise I needed tickets! I got one, and flicked through my programme. 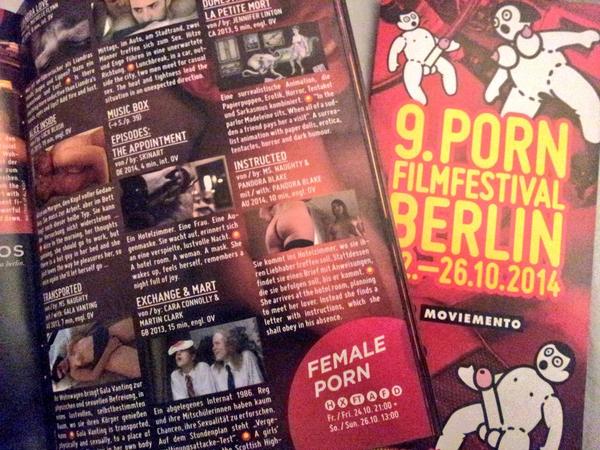 But in my emotional state, I also felt irrationally jealous of all the people showing feature films, and scared that my solo hotel-room short wouldn't measure up in terms of production values. Seeing the amazing work on offer, I felt increasingly intimidated and out of my depth.

I was also feeling felt frustrated that although I've been producing films for five years and distributing them - profitably - for three, I can't seem to carve out the time I need to edit screenable versions of my films. Instructed is only here because Ms Naughty took the time to edit a tight version of it and send it off before the deadline. None of the other films of Dreams of Spanking are being screened because I know they are too slow to screen well without editing, and I haven't had time to re-cut them yet.

I'd barely had time to finish this thought process when it was time for the opening film: R100, a dark, twisted, funny Japanese sex comedy that is jokingly rated "ages 100 and over". This is, however, a fair indication of how fucked-up it is. The film is about an S&M contract that goes horribly, horribly wrong. R100 breaks boundaries. The protagonist's. Society's. Ours. It is, in fact, totally fucked up. It's not just boundaries that are broken, either, but the fourth wall, tension, and all the rules about narrative and filmmaking. The film flicks between realism and surrealism, between narrative and meta-narrative.

The way this film toys with tension is nothing short of masterful. Events escalate, and sequences of slow, suspenseful realism rachet up the tension. There are some moments that are straight out of a horror film, with shadow lighting and shaky camerawork. Then, just as quickly, the tension is broken; the film will flick to a high speed car chase or glossy hi-octane montage where the ultraviolence, the fucked-upness, is styled out and seems less traumatic. Then it switches just as quickly back to gritty realness, and you realise with horror that they're going to follow through on the traumatic things that just happened in realness mode. This is a film that loves to fuck with your expectations. They don't follow through on the trauma - instead they do a different kind of fucked up traumatic thing, each one increasingly surreal, until you've left the world of real-life horror and entered a world of war imagery and Japanese demons.

It's interesting, because the most horrific moment in the film is only about half way through. But as a narrative choice, it works, because once the most dreaded thing imaginable has happened, all the normal rules of escalation have been broken. After that, anything could happen. Literally anything. There are no rules. And then just as you've stepped off the edge of that cliff, the film breaks the fourth wall and suddenly, brilliantly, all the tension is relieved, and you feel like you can bear to keep watching; so when they dive back in to the story, they can push it and escalate and take it far further than you ever imagined. And then, at the end, suddenly it all comes together in a way that is simultaneously beautifully affirming and positive and makes sense of everything, and ridiculously satirical and absurd.

Amazing film. If you like twisted Japanese mindfucks you will love it. I want to show it to all my friends.

Afterwards I sat in the bar and got a glass of wine, and I did a brave thing: I went up to some people speaking English and asked them if they were filmmakers. And they were! It turned out they were a group called Four Chambers from the UK, making very interesting independent porn. Before I knew it, I was immersed in a conversation about collaboration, pair-editing and being a creative control freak. After that it all fell into place. I caught sight of Gala Vanting and went over to say hi, and within 5 minutes everyone I knew was there; Ms Naughty and Luke, Jennifer Lyon Bell and Annabelle Lee, Lucie Blush, and Jiz Lee, and Courtney Trouble, and I was talking talking talking and starting to realise that I might be able to cope after all.

I learned that you need to get a ticket for every film you want to see, and they only become available the day before. They're free if you're a filmmaker, but you still have to get them - even if it's your own film. And they sell out. So I got a tickets for every session on Thursday. Each session has three films showing at once, so I had to make choices off the cuff. The guy in the queue behind me was like "You're going to watch 12 hours of film?" and I blushed. I just wanted to make sure I had the option.

Then I saw something else in the programme I really wanted to see, and came back and got a ticket for that too. So now I had a spare ticket. Apparently you could hand them back in, and then they got handed out to people on the waiting list. While I was chatting to Lucie, someone came out and started calling the names on the list for the next film, distributing any unused tickets. This atmosphere - it was exciting! I realised that the system of scarcity would make me far more interested in seeing as many films as possible than if I had automatic entry to all of them without effort. The excitement was contagious.

Then my host arrived - well, the flatmate of my host - so I could finally land properly. She helped me with my bags, raising an eyebrow at me for needing two cases for five days (they are small cases, okay). The flat is super close to the cinema, and absolutely beautiful - a lovely high-ceilinged space full of bikes and pot plants and shared by four queer housemates. I felt instantly at home. I dumped my bags, took my meds, and jumped straight in the shower.

Now I'm clean, with brushed teeth, in my pyjamas, with wifi, and starting to feel more like myself. I spent a while catching up on internet things - I had a Dreams of Spanking photoset intended for this evening but I haven't put it in the CMS yet, so I'll have to leave that if for the morning. Meanwhile, I can have nine hours sleep in a quiet warm bed in a lovely safe house full of friendly, porn-loving women. Oh, Berlin. I am already starting to see the appeal.

265 likes
Reply | Link
Posted by Sex News: Ebola and sexual transmission, Titcoin redux, social network teledildonics | PornCrazy.net at 21:22 on 27 Oct 2014
[…] — I’m sad to miss it. Happy for us, Pandora Blake is blogging her experiences there. Landing in Berlin (Spanked, Not […]

0 likes
Reply | Link
Posted by Sex News: Ebola and sexual transmission, Titcoin redux, social network teledildonics | CumFirst.com at 11:59 on 27 Oct 2014
[…] — I’m sad to miss it. Happy for us, Pandora Blake is blogging her experiences there. Landing in Berlin (Spanked, Not […]