The current legislation surrounding porn distribution in the UK is not fit for purpose. The AVMS regulations, deriving from BBFC guidelines restricting what content can and can’t be classified for DVD publication, are out-dated and absurd, and do not reflect current social standards of obscenity in the UK. Many of the restricted acts, such as fisting, urolagnia and full bondage with gags, are common consensual practices, easily made completely safe with prior negotiation and common sense safety procedures. Others, such as ejaculation by cunt-owners, are in reality impossible to control - it is simply the way that some bodies respond to orgasm - and attempting to ban their depiction can be seen as a regressive and sexist crusade to control our bodies, autonomy and sexual enjoyment. If the BBFC guidelines ultimately derive from the Obscene Publications Act, they should reflect current standards of social acceptability, and few UK juries would deem most of the acts on this list “likely to deprave or corrupt” - particularly since the trials of Michael Peacock and Simon Walsh in 2012. If our businesses and creative works are going to be regulated according to these guidelines, we demand that they be reviewed and brought up to date with current social standards.

It is deeply suspect that films deemed “pornographic” should be subject to different legal restrictions to films considered non-pornographic, when the subject matter is often indistinguishable. Many of the films screened at the British Fetish Film Festival do not depict nudity, fucking, or other acts traditionally categorised as sexual. Is Itzi’s film of fully clothed women schooling a suited, handcuffed man in feminist theory,more of a “sex work” than TV shows such as Game of Thrones? It might be porn for some - but so might anything. Human eroticism is so varied and subjective that any act can be sexually charged for the right person - and any attempt to categorise some works as definitively sexual and others as non-sexual seems loaded with ideological misconception. What about the cinematic custom film by Restrained Elegance of someone trying and failing to get their car to start; or Fetish Eyes’ tongue-in-cheek depiction of a woman doing housework while wearing heavy rubber hazmat suits?

When Hollywood is able to show bondage, gags, torture, rape, and sexual violence at every turn, the distinction between “pornographic” and “non-pornographic” works begins to feel entirely arbitrary. It seems as though we are being singled out purely because we are enjoying ourselves - and because as small-scale, indie producers, our budgets aren’t high enough to buy us a free pass.

The requirement that all adult sites demand age verification by credit card for the viewer even to be able to enter the site is impractical and discriminatory. We do not yet have a system for secure, pseudonymous age verification that does not reveal the identity of the viewer: it is absurd to legally mandate us to use technology that does not yet exist. Credit cards are a flawed method of age verification - it compromises user privacy, penalises those with poor credit ratings or those who are simply too financially savvy to run up credit card debt, and it is so off-putting to prospective users, who might well not be willing to pre-emptively enter their card details before they know if they want to buy, that it would decimate our businesses.

If we are to be subjected to restrictive legislation that controls what we are able to publish, and how we are able to trade, why are other industries not placed under the same scrutiny? Why not insist that wine sellers require credit card age verification before viewers are able to browse the list of bottles on sale - or games or DVD sites offering 18-rated titles? How can it be harmful for us to show actors simulating staged rape and violence, but fine in Hollywood? The double standard that arbitrarily segregates works deemed ‘sexual’ according to some obscure set of parameters, and subjects them to punitive and prejudicial restrictions, is hypocritical in the extreme. 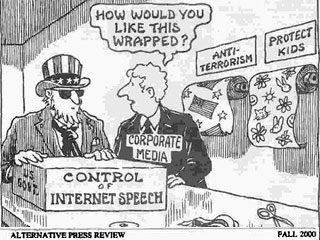