My most destructive finger slip ever

Since the start of this week I've been on parental leave. Hooray! My baby is due in 4-5 weeks time - which means of course that the birth might happen sooner than that, but it might be later, too. Due "dates" are a bit of a misnomer; it's more of a due month (38-42 weeks gestation).

I decided to give myself the last month of my pregnancy off, and I've been looking forward to this time for ages. Well, I say off. To be truthful, I'd earmarked this time for admin (filing my tax return early so it's out of the way), writing (I made great progress on my book in April, but May was full with other endeavours, so the zeroth draft is still some way from completion), sorting the house out and getting ready for the baby, and resting.

I've also decided to hand over project management for Dreams of Spanking to a trusted friend, so that new updates can go out while I'm caring for my newborn. I have a fair few spanking videos edited and ready to publish, and it will work really well for me to delegate the job of keeping track of what needs doing for each one (in terms of image editing, trailers, writing copy etc) before it can go live. So I've ended up having to do that handover during my "leave", too.

Which is all very well - it really shouldn't have taken long. Unfortunately, I scuppered my own process before I could even start.

While creating a new FTP login for my project manager, I decided to clear out old FTP accounts on the server that were no longer being used. There were about ten of them that needed deleting. Each one was associated with a never-used public folder that the software had auto-created on the server; there was a checkbox for "do you want to delete this folder". It threw a warning that doing so would delete all the folder contents, but they were all empty, so that was fine. I went through on autopilot and ticked all the boxes.

Then I realised that one of those FTP accounts had had root level access. I'd just authorised cPanel to delete the entire contents of my root directory on Dreams of Spanking. 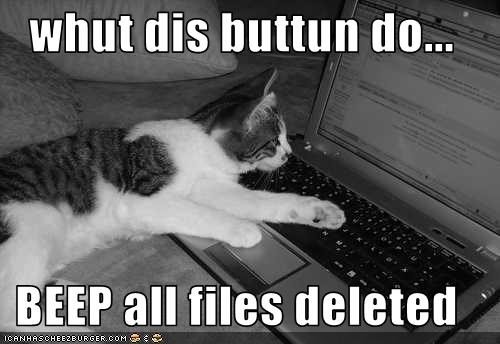 Kicking myself, I asked my sysadmin if there was an "undo" function. No dice. I'd have to restore the site from backups. That's OK, I thought, I have backups; in fact, when I checked, I found that the most recent one was dated Jan 2019, so I'd only have to do a bit of work manually restoring anything added since then. I set it uploading.

Then I realised that my backup hadn't included the members-only files folder; at over 500GB, it's too big to have multiple copies sitting around. I've got those saved somewhere else. So the good news is, I haven't lost any content. The bad news is, my local file tree is a completely different structure to the file tree on the server. On my computer, I have one folder per scene, which contains everything - members only files, free hosted gallery, preview thumbnails, film festival edits. On the server, each of these types of material is in a different place in the file structure. And to make matters worse, the name of the folders for each scene is different on my computer than on the server.

So, rather than doing the project handover I'd intended, I spent yesterday afternoon manually going through my Dreams of Spanking folder on my home computer, renaming and reorganising everything to make the folder names and directory structure mirror the structure on the server. Only once that process is complete can I reupload all the content.

Meanwhile, I reuploaded the site templates, so the website is (to some extent) back up - but none of the members only content is accessible, and the cached images for the free previews will only last so long.

I've spent over eight hours on this process so far. When I realised that my "Jan 19" backup was only for the site templates, and actually seems to date from 2014 in the case of the free preview folders and trailers, I swore a lot.

Noticing that I was still only partway through, Felix has just taken pity on me, and has started writing a script to help me automate the process of checking and moving every folder until it looks like I want the file system to look like on the server. So hopefully that will speed things up - although there'll be some things I still need to check manually if they don't look like I expect, and I'll still need to triple check everything has been moved to the right place before anything gets deleted. As you can imagine, I'm feeling stressed and anxious about the whole thing.

I am a colossal idiot. I had no idea that it was so easy to cause so much damage, and I'm definitely going to approach delete functions on cPanel with immense caution from now on.

Dreams of Spanking members who can't currently access content: I'm so sorry. I'll be extending everyone's memberships for a few days by way of apology. And I've learned a valuable lesson: my so-called "backup" wasn't fit for purpose. At least I'm now taking the opportunity to systematise it, and create a genuine mirror of the file structure on the server on my local drive - but it really shouldn't have taken a fuckup of this magnitude for me to learn that!

When I was an apprentice (many years ago) we had a 6 user computer which we shared.
We had our own directories but this was long before user & root protection. I typed del *.* & pressed return to clear my directory - but then noticed the prompt was c:\.
It took 3 days to restore from backups during which time we all went back to paper coding. :(

You'll be in a better place for future disaster recovery :)
xx

Posted by Pandora / Blake at 15:13 on 6 Jun 2019
Thanks for the support. Why is it so helpful to hear other people's catastrophe stories when something like this happened? I'm sorry that you had that experience, but it does make me feel better knowing I'm not the only one to do this sort of thing!

39 likes
Reply | Link
Posted by Anonymous at 00:23 on 7 Jun 2019
Bless you. Hope the birth goes well, but say in about 6 months time, you can offer yourself up for a thorough spanking for your actions! LOL

I have been thinking about you lately (mainly because I couldn't remember when the baby was due!) I hope things go really well in a few weeks! Sorry to hear about the computer problems!

But I also wanted to tell you that I have been watching "Mrs Smith's Method", and I wanted to say how particularly good it was. I read about Mrs Walter Smith many years ago in "The Worm in the Bud" (a serious Pelican book about Victorian sexuality that was an extremely exciting revelation to me in my early 20s - when I never dreamt that I would be able to read about - let alone do! - the things that I have read and done since!). It was quite clear from the script how carefully the original source has been used - if any liberties were taken, they were taken in the mind of the original writer, but the film was extremely faithful as well as atmospheric and well-acted!

Hope to see you again in the future!

Posted by Pandora / Blake at 12:27 on 22 Jun 2019
Hi Ernest,
Thanks so much for the good wishes!
I'm really glad that you enjoyed Mrs Smith's Method. It was such fun to make. How exciting that this is a story you've also heard! I have to admit I hadn't heard of her until the writer got in touch with me to commission the film, but once I learned of her story I was hooked. Thank you for the lovely feedback!

Posted by Lita Copeland at 12:50 on 7 Jun 2020
Glad to see this kind of brilliant informative post, and this is the post I have seen today. http://www.1centhostingcoupon.com/