Pirates and slavegirls and bondage, oh my

Immediately after getting back from Germany, I was plunged straight into a whirlwind of activity shooting with the lovely folks of Restrained Elegance for three days of shoot trade: one day for their site, and two days for mine.

I was more than a little nervous about this shoot. I've been a fan of Restrained Elegance for ages - even though the doesn't much cater to my primary kink, the quality of their work is undeniable. I think I can safely say that they are the most professional, aesthetically stylish, cinematically ambitious UK kink production company. 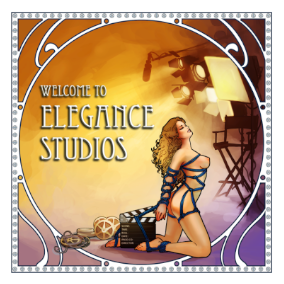 My favourite out of all the contents I've seen so far is a short film from 2007 called "Slave Dance", starring Ariel Anderssen (better known to us as Amelia Jane Rutherford). In order to fully explain why I like it so much I have to spoil the "twist", but it's quite an old film, so I hope Ariel and Hywel won't mind.

In May 2007, Ariel entered her probationary period as the Restrained Elegance resident slavegirl. One of her assignments was to create a slave dance incorporating the slavegirl positions she was learning, and displaying her body in as refined and submissive a way as possible. (As Hwyel says ominously at the start of the video, because this is her first assignment it is an "unbound" dance. If she's done a "bound" dance since, it hasn't been released.) Ariel writes,

I loved choreography when I was a dancer, but that was a while ago, and making up a dance from scratch challenged me in a way I wasn't used to. I liked the idea of the dance being slow and ritualistic, the way I could imagine a geisha or a harem-slave performing for an invited audience.

As well as being ballet-trained, she has worked as a professional choreographer in the past - and it shows. Combined with her impressive slave training and Hwyel's production talents, this is one of the most extraordinary pieces of film I have ever seen.

It's short - only 8 minutes 40 seconds. The dance (and the track it's set to) takes less than half that long, but is performed twice. The music is haunting, primal, mystic vocals over industrial bass. Perfect for the context (and reminiscent of the bellydancing music I once saw Niki Flynn dancing to. Is it a standard genre?)

The dance begins in the studio, with a very young looking Ariel wearing her high posture collar and a silk kimono. As she dances, the film cuts between shots of her performing the same dance in four other locations and outfits. Inevitably, knowing Hwyel, she's barefoot in all of them, and may be wearing the collar in all of them, although it's not easy to tell. They were probably all (apart from the studio) filmed at the same location, but the effect enriches the dance enormously. The cuts between shots, in time with the slow, evocative music, add impact to Ariel's movements and display her in a variety of beautiful settings.

After the dance is finished, Hwyel ramps up the tension by putting nipple clamps on Ariel and instructing her to perform the dance again. Ariel is aghast. "I can't dance in these!" she cries desperately, eyes wide with pain. "I can't!" Who cares if she's acting? The effect is primeval. I found myself shuddering with empathy, and my body answered with a tremor of excitement.

The second dance is filmed entirely in the studio. Ariel's face, voice and body are, as ever, amazingly expressive - you can see every wince, hear every caught breath. Her dancing is notably less steady the second time. You can hear her gasp in pain as she stretches. By the time she's halfway through, there's a sheen of sweat on her pretty face, and you can see the pain in her eyes. The most dramatic - and physically taxing - moves come at the most dramatic points in the music, and as she cries out in the new agony inflicted by the new positions, the music swells and surges in perfect counterpoint. The synchrony between dance, sensation and soundtrack means that the music naturally complements the emotional curve of the scene. The last section of the dance is the most physically demanding (and sexually explicit) of all. By the end she is crying and whimpering in pain and effort. The combination of her vulnerability and submissive obedience with her poise, grace and astounding talent as a dancer is incredibly hot. As a dance and a film, this is beautiful and unusual - and, through one simple twist, it becomes one of the most intense D/s scenes I've ever seen on film.

The dance is just astonishing, showing off her flexibility (and terrifyingly bendy shoulders - I will never be able to manage half of these postures) to extraordinary effect. As dance, as choreography, as cinematography, as an incredibly intense D/s scene - this little film deserves to be famous among kinksters everywhere.