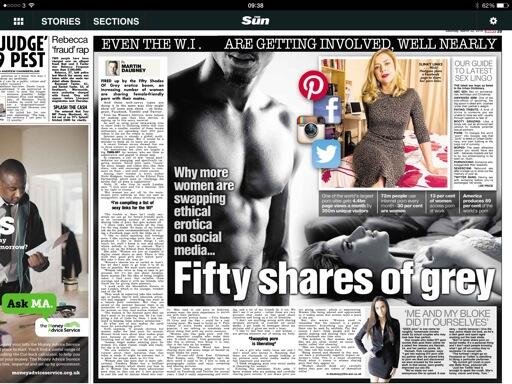 When the opening panel of a conference comprises a writer, a pornographer and a lawyer, you know youre set for an intelligent, stimulating weekend.

I wrote yesterday about a couple of recent scenes with D that brought me to tears. Tears during spanking are both often sought after and misunderstood. Some people seem to build them up as a sort of ultimate signifier of severity. You know: if you don't cry, it wasn't hard enough; if you cry it must have been really bad. But as my experiences with D show, tears can be triggered by the lightest of spankings. It can be simply about your emotional state going into a scene, the trust between you and your spanking partner, a feeling of helplessness or vulnerability.

I sometimes receive emails from submissive clients asking if I can make them cry in a scene. This request is usually framed as being about "pushing their limits", but tears and limits are by no means synonymous. Actually, pushing my limits is generally an empowering experience for me, a challenge of my strength, and rarely associated with the fragile, vulnerable headspace in which I'm likely to cry.

Crying during spanking is, I think, fundamentally about letting go. If you are trying to control yourself, your reactions, or the scene itself, you're unlikely to cry.

I'll post the text of my one-hour talk in two parts.